Looks like the ADMX files for the 1511 update has almost the same problem as the last time:

If you previously has copied ADMX files for Windows 8.1 you might see this error:

Namespace ‘Microsoft.Policies.WindowsStore’ is already defined as the target namespace for another file in the store.

Download the Windows 10 ADMX files from here Administrative Templates (.admx) for Windows 10. Install the downloaded MSI and then copy all ADMX files and the language folders you need (ADML files) from “C:Program Files (x86)Microsoft Group PolicyWindows 10PolicyDefinitions” to \FQDNSYSVOLFQDNpoliciesPolicyDefinitions 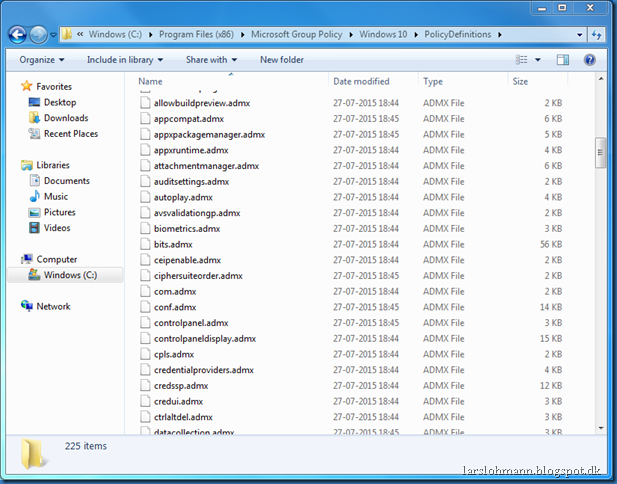 Accept to copy and Replace all files and folders: 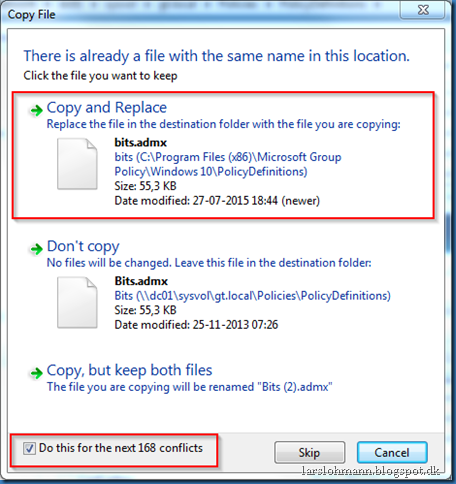 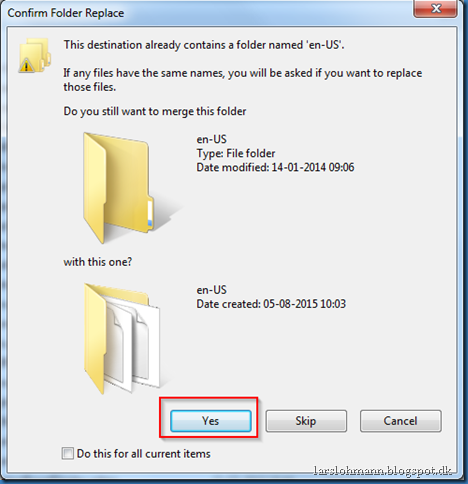 After copying you need to do this:

“‘Microsoft.Policies.Sensors.WindowsLocationProvider’ is already defined” error when you edit a policy in Windows

Now that we are typically dealing with Windows 2012 R2 and Windows 8.1 it’s its time for a short update.

The procedure explained in this article is still valid, but at the moment the easiest way is to download the ADMX files from here http://www.microsoft.com/en-us/download/details.aspx?id=41193 and copy all ADMX files after installing the downloaded file from “C:Program Files (x86)Microsoft Group PolicyWindows 8.1-Windows Server 2012 R2PolicyDefinitions” to \FQDNSYSVOLFQDNpoliciesPolicyDefinitions

Then copy all the language folders (with ADML files) for the languages you need ending up with something like this were only en-US language files are used. 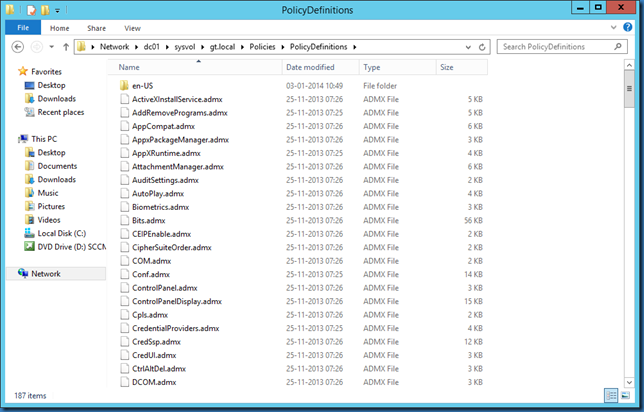 By using the downloaded files instead of the files in c:WindowsPolicyDefinitions you will see a bit more files than in the local PolicyDefinitions folder, in my example the ADMX files added were these:

In order to take full advantage of the ADMX/ADML template files we create a central store for the files.

To create a Central Store for .admx and .adml files, create a folder that is named PolicyDefinitions in the following location: \FQDNSYSVOLFQDNpolicies as shown here 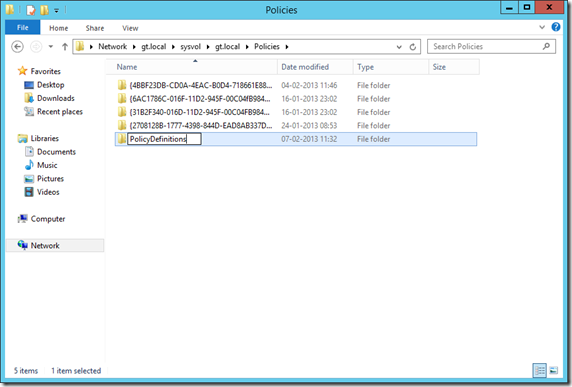 After that copy all files and subfolders from the PolicyDefinitions folder on a Windows 2008 R2 server to the same location overwriting any existing files.

The same has to be done if you source is Windows 8 and Windows 2012 instead. 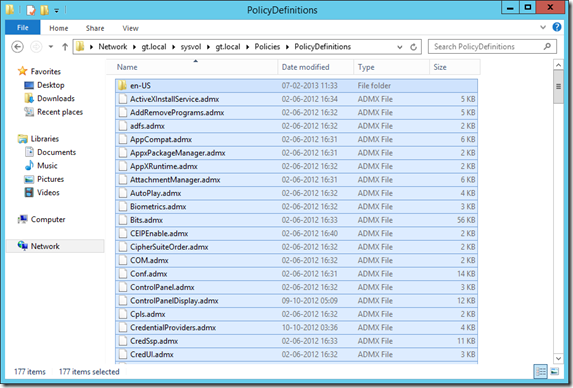 The reason for copying from both Windows 7 and Windows 2008 R2 is that some ADMX/ADML files only exist on one of the platforms.

To make this a bit more complicated some ADMX/ADML files will first show up in the local PolicyDefinitions folder when the corresponding server role has been installed.

ADMX files for other products can also be copied to the central store, more on this later

When the central store is in use you will see the information Policy definitions (ADMX files) retrieved from the central store when looking at the administrative templates in the Group Policy management Editor (GPMC).

Please also see my list of available ADMX files that you could add to your Central Store when needed:

Remember to use the latest version of the Group policy Editor or you could end up with errors like this: